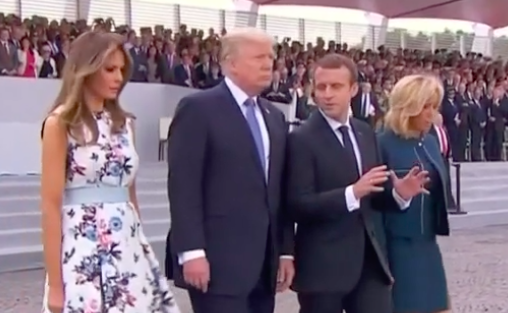 Above: still from BBC news coverage of the meeting of Donald and Melania Trump and Emmanuel Macron and Brigitte Trogneau to commemorate Passchandaele and Bastille Day July 14th.  The women have been described both by the media as adding ‘glamour’ and by Trump as ‘in good shape‘

The ‘shape’ of what a person is, can be, ought to be is something we all dream about through culture, high and low.

The ‘shape’ of what someone can be though, is something that power can play with unless it’s held in check. Melania’s relationship with Donald is contingent we think. We watch her as she crosses the world with Him and when she crossly brushes his hand away publicly: we’ve been ‘writing‘ this story for ever, for all women, everywhere.

The myriad possibilities of who we are called up short as we realise our noses are pressed up against a window on other people’s lives that we wish would change.

I’ve just finished reading Zadie Smith’s Swing Time, a novel that goes into the pasts of two girls growing up on an estate in London while gently and maturely saying: there is hope…it does ‘lie in the proles‘ as Winston Smith realised in 1984 but Z Smith’s reading  in her writing of what is a ‘prole‘ cuts across class, race and celebrity status.

The narrator is anonymous though she has a life that unfolds across London, America, celebrity, political activism and West Africa. This anonymous narrator though, is what Alice Walker calls and what wonderful writer and essayist Rachel Kaadsi Ghanzi notes in her recent  interview with Zadie: ‘the seed of the flower that our mothers and grandmothers never see’.

The gift of creativity. Swing Time is a tribute, a nod, a tap, a carousel and kaleidoscope. It’s a story and the music of the always hopeful as they grimace on the highs and lows of the fairground that’s never fair, a novel that’s a lesson, we’re all the authors of our own stories, now the spider, then Robert Bruce, we keep on writing, like tapping and dancing until we get it just and right. When the weak meet the strong without protection we just keep on trying, we’re all caricatures, caricatured with a need for a richer, more detailed view of where we’ve been and where we are now.

Space for the word. 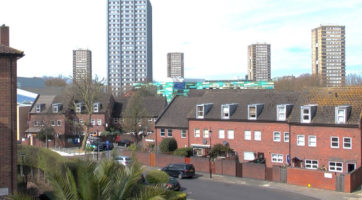 Above: collage of images based on themes in Swing Time: Lancaster West Housing Estate in London, a couple of Images of Grenfell Tower,  Jeni Legon and Bill Robinson in “Living in a Great Big Way” celebrity adoptions of African children and James Fenton and Darryl Pinckney  who pop up in Swing Time as a safe place for the anonymous narrator to escape to, a place where she faces herself for the first time in her life as an artist I thought.

One thought on “Bliss it was in that dawn to be alive: rewiring culture, rewriting books, music, dance, art: Turing would be proud”