Dinorwig in Wales is a great place to stay and the home of Electric Mountain  Pump Storage power station built in 1983: a very, very successful operation. (in view of the recent success of alternative energies in Britain, the next phase of hydroelectric development, the Glynrhonwy scheme near Llanberis, proposed by the Quarry Battery company in 2013, might now also be one step closer to realisation). 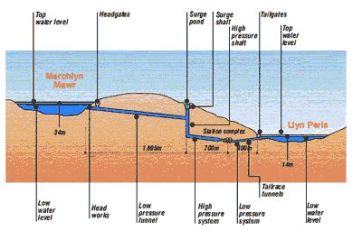 Above: the residential feel of Dinorwig, when you walk through the village,  plans for the excavation of the site in 1975, the scale of Electric Mountain in Snowdonia, Inside Dinorwig and a turbine.

Dinorwig pump storage power station is a monster battery, storing energy by pumping water from the lakes to a lake at the top of the mountain and lets it flow back down hill releasing energy at points of peak demand. Dinorwig delivers power in under 12 seconds, connecting it instantly with a bigger worldview of energy possibilities, it’s one of the fastest responding power stations on earth. 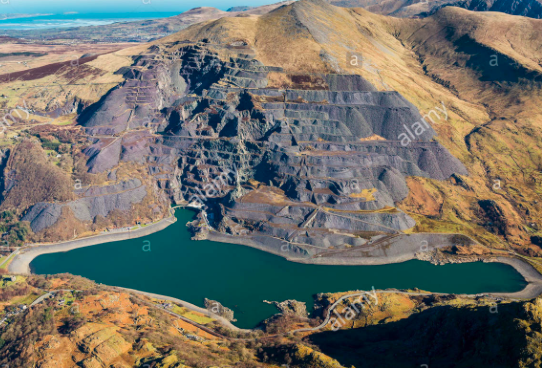 Above: visitors guide to Snowdonia (including Electric Mountain), aerial view and Dinorwig Slate Quarry (which reminded me strangely of the ruins of the second world war…)

Solar, wind and tidal technologies are changing the way we see energy,  even the way Aramco  the biggest holder of oil in the world, sees energy. (Aramco was originally the Saudi exploration arm of Chevron who today,  hold more oil barrels than the whole of North America) are now planning a future city that will connect Saudi Arabia, Jordan, and Egypt.

In its Vision 2030 Master Plan,  the Saudi ideal is to move away from oil as a source of energy value and through implementing new energies improve social inclusion and capital.

The country plans to increase electricity generation from renewable energy sources to 9.5 gigawatts by 2030. In Britain we’ve smashed our solar energy generation targets:

Solar power has broken new records in the UK by providing nearly a quarter of the country’s electricity needs, thanks to sunny skies and relatively low summer demand.

National Grid said the thousands of photovoltaic panels on rooftops and in fields across the UK were generating 8.7GW, or 24.3% of demand at 1pm on Friday 9th May 2017, smashing the previous high of 8.48GW in April.

Experts said the unprecedented share by solar energy meant about 60% of the UK’s power was low carbon, taking into account Britain’s wind farms and nuclear power stations too. That figure is normally around 50%.

Saudi set a record October 3 in its first solar tender, drawing bids of just 1.79 cents a kilowatt-hour, a quarter lower than previous prices for the cheapest solar energy in the world.

ACWA Power will be participating in a tender this month to provide a food processing firm with a “significant amount” of solar power that will come in below 100 megawatts, the plan of Chief Executive Paddy Padmanathan.

Clean power agreements are increasingly part of the balance sheet in american and Nordic companies.  Facebook, Apple and Amazon are able to use their status to secure fixed price contracts for their energy. Saudi companies want to do this but they want to be much more inclusive and innovative in the way these technologies are applied.

Speaking at the Future Investment Initiative in Riyadh, the crown prince said people with vision would see the opportunity.

“This place is not for conventional people or conventional companies, this will be a place for the dreamers for the world…all the success factors are there to create something big in Saudi Arabia,” and just incase any women thought they might have a place as a person in this beautiful new world, the boys were there with there female servant robot, Sophia that the naive Saudis gave citizenship to.

Can you believe this in the 21st century? They gave Saudi Citizenship to a Hanson Industries very gender stereotypical female robot, Sophia.

Oh dear, time for a reboot.  I think the Saudis have been had by the misogyny of western culture at ta time when they really have a desire for a more gender neutral, nuanced approach to regeneration and new ways of using our energies.

One thought on “Dinorwig Pumping Station: 8 Years To Build: Delivers Power In Under 12 Seconds: Not What Most People Would Call A Battery…..But What Exactly is Sophia?”