Lubaina Himid won the Turner Prize this year. For anyone over 40 at last time is back in joint. Because the work of everyone who has knitted Lubaina into the history of art has also knitted in the reparations for the evils of slavery and all the people who have worked for the last thirty years outside the market circles of values.

All the world can be restaged, after all. 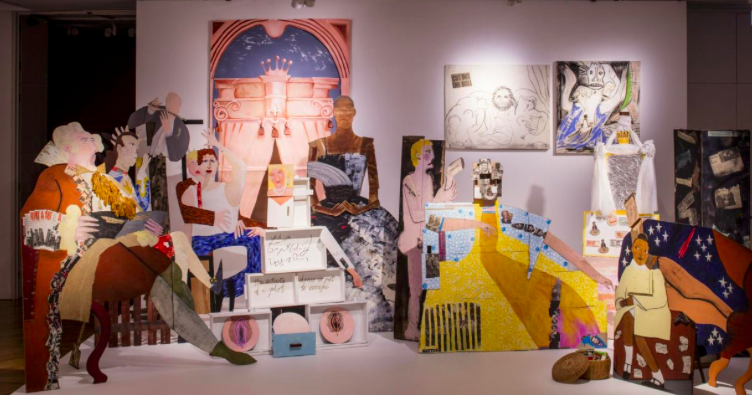 Last year I attended a conference as a guest of a new friend who’d walked me up and down Nottingham’s streets and told me about what black activism was in the 1940’s 50’s 60’s and 70’s. She was going to a two day conference on how the unspeakable things of slavery could be spoken at Nottingham Contemporary: would I like to come? 12th and 13th October 2016.

In 2007 I’d been invited to the conference about slavery at Nottingham University. It was depressing: a chillingly privileged view of all things academic. Now I love academic work and academics but this was really just gatekeeping on a mighty scale.

All those years ago and not knowing anything really, I’d just written it up, word for word (I can write pretty fast) and later had written a very bad play about a hypothetical conversation in the all white staff room about the mainly all white canon, the way history, literature and culture were taught at a hypothetical university and why the tools of technology that could be used to make a difference get lost in a bureaucracy.

The reason the play was so bad was that I was looking for the answers to the question of educational, social, cultural and political access through the text I’d scribbled down at that conference: 1) what the university said about slavery and 2) what people who gathered in the university for that conference said.

I couldn’t find anything in those thousands of words that would let everyone go translated, welcomed, full of hope into a shared future. All I could see were all the reasons why ‘difficult’ students and ‘difficult backgrounds’ were denied access and reasons why ‘it was ‘difficult’ to do anything other than what they were doing in connecting with the community.

I believed (but didn’t really) what these people who seemed to speak with one voice telling us all earnestly, that they were the gatekeepers and they were doing everything they could to change things. I didn’t stand up at that conference and say: ‘Well you’re wrong actually, you shouldn’t be speaking for ‘so called underprivileged people‘, you shouldn’t believe that you’re invisible and everyone else is visible and that you are the mover and you are the shaker.

In the conference  last year at Nottingham Contemporary I began to realise that it’s all about currency and exchange and how you revalue labour and exchanges of all kinds in all places.

Currency and exchanges made me wonder about a new currency.  I’m interested in the work of Christian Nold who works with technology and human aspirations and remembered his work on creating a new kind of money to value cultural exchanges.

The conference last year was organised around The Place is Here  exhibition at Nottingham Contemporary. The local regional and national will behind the power of this exhibition to succeed was immense. I was interested in the art and imagining how I could travel with the narrative of slavery inside time, outside time and wondered if you could create imaginary gift vouchers for all of the participants (see below):

The narrative is it’s about the politics inside time…now and then. The conference inspired this blog, the idea of restitution and integrity of all the stolen value that belongs to all of us and how we revalue our bodies, ourselves. I attended a writing workshop on the exhibition with the amazing and inspiring Panya Banjoko. I wrote three poems based on the exhibition and the politics behind it.

Above: Black Assassin Saints refers to South Africa during the early 1980s. Several British companies (some of which are named in the work) had subsidiaries there and they came under mounting pressure from the British public to withdraw. Their activity provided financial support for the South African government whose practices were racist and violent. Many felt this involvement was unacceptable as it legitimised the brutal regime. Apartheid confirmed the marginalised status of black people in certain parts of the world.
Keith Piper 1960
Inside The Atrocity Exhibition
FACES
Like Warholian Turin Shrouds
Screaming like Freud
Out of Print
Out of Print
Out of Print
Piper was here though
on that night
to watch the way the eyes
rolled over
his work
Keith Piper
who’d fought with the idea
the feeling
the constraints
and powerfully placed the work
as if it was already there
as if
It wasn’t absurd
to be documenting
such atrocity
within the sado masochistic complex
of oppression
as if he wasn’t just having a laugh
at his oppression
but it
really
matters now
When we look at Andy Warhol
Look at him
A dead billionaire
And Keith Piper is still here
Artistic conjurer
occasionally coming up for air.

It was great to think that all of the galleries from the Ferens Gallery in Hull with the artists shortlisted for the Turner prize, the Tate with The Soul of a Nation exhibition had created a place, the reflective glass a stillness, a tropic inside toxic tropes about blackness that could understand space as a theatre of peace as well as contest, war and struggle.

All the world’s a stage.

And Lubaina Himid is a professor of extraordinary courage, the prize is very important: all of the artists in these exhibitions can now work anywhere…they can fly if they want it.

Lubaina’s work is about democracy:  the most important thing is that audiences have been given a golden ticket, to follow their lives in galleries, more galleries, more of the time.

Politics, social concerns: Lubaina is inside the canon, is the canon. 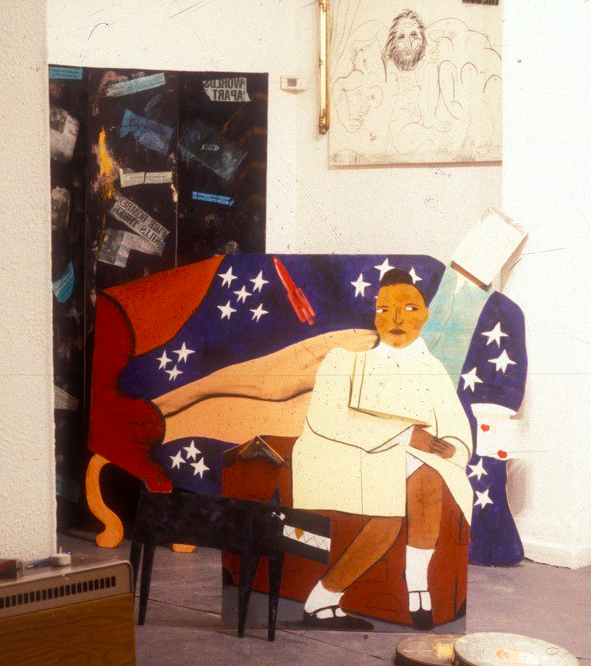 Above: the filmic stage of A Fashionable Marriage: Lubaina Himid

Lubaina: Thanks to the people of Preston,  Hull..who stopped me to wish me luck…it worked! The teams Harbour Blackpool, Belmont, Longridge  Preston Making Histories Visible  all strong clever artists I talk to women, love them.  Matt Birchall,  Taylor,  Lisa Panting,  Hollybush Gardens,  to the arts and cultural historians writing about my work, to Susan  who never gave up or let me throw away anything.

My mum, Patricia who wanted me home by 10pm (I found out how to squeeze as much as possible in those five minutes before 10) Richard Liss,  Ingrid Pollard, I know I show off and dance into the early hours….’