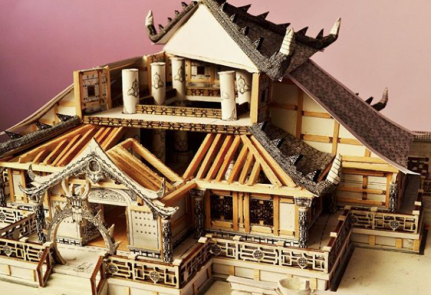 Above: examples of the work of Kyle Biggs: from left: visual for ‘The Jackdaw Ship’ Model of a Sicilian villa for adaptation of Garcia Lorca’s Blood Wedding, Drawing of street using a fine liner, Design for Japanese palace, Merchandise logo design for  Channel Spark, Emperors Palace exterior, the set design for an adaptation of Zorro blending elements of Chinese/Japanese design

Looking at his instagram I was immediately struck with how students like Kyle absorb the news in their fields and related fields. This is something we don’t often think about, a dimension of creative work as ‘being, feeling, absorbing’ in the world which makes work news like and relevant to a much wider audience.

When I looked through the images posted I thought about the awful arson attack on the Kyoto Anime Studio, where, apparently a designer who believed his work had been stolen and copyright infringed, took revenge on the studio with an arson attack that killed 35 people. Kyoto Studio had a reputation for astonishing storytelling in the anime genre:

Now whether or not the talented Mr Biggs was thinking of Kyoto Anime when he produced these great images, I don’t know, but what it made me realise is the power of design to make people think, reflect, connect and communicate.