It’s a legacy between generations: grandparents, parents passing on the joy of a cooked, shared dinner.  Like presents and heirlooms,  it’s the atmosphere we remember, especially at this time of year.

Like many great inventions, Bisto gravy was created through necessity. A Mr Roberts and Mr Patterson, employees of the Cerebos salt company in Cheshire, formulated a recipe for an easy-to-use gravy powder in 1908. Their wives thought it would be fun to give their technician husbands a problem to solve. Can chemistry help us have a lump free gravy? They rose to the challenge: it was named “Bisto” because it “Browns,(It) Seasons and Thickens in One Go” and soon beat Cerebos products in popularity, but the lads invention was the property of their employer…

The idea of the first visual for BISTO was so evocative and powerful that it hasn’t really changed in the last 90 years. Passed on to us in 2019 by families glued to TV ads in the 1960s, 70’s, 80’s and 90’s, the first ad of the Bisto Kids, drawn in 1919 by London Tatler magazine illustrator Will Owen (1869–1957), shows a boy and a girl turning up on time, drawn by the wonderful aroma of a gravy dinner.

From its first publication, the ad was successful in newspapers and magazines and is an important part of the way the brand works to bring people together today. 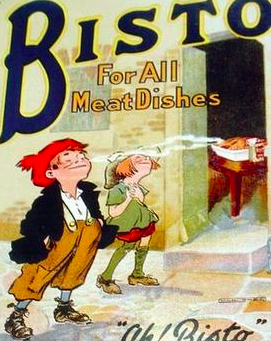 Above: Ah!: Bisto as the ad developed and below, left and right, the kinds of documentary illustration of Will Owen and the ad sandwiched between. 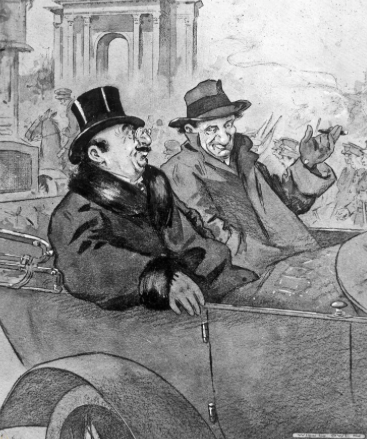 Bisto Granules, which dissolve in hot water to form a gravy substitute, were introduced in 1979. As of 2005, Bisto Gravy Granules have a British market share in excess of 70%. Most UK grocery outlets stock a Bisto product.

The famous red packets are the “favourite” flavour, purportedly beef flavour (although it contains no beef). Bisto also comes in varieties to accompany chicken, turkey, lamb, and other meats.

In 1991, Bisto launched a new, more expensive, beef-like granule. Packaged in a glass jar, it offered a fuller flavour than the standard granule. Fuller flavour chicken and onion variants were added in 1993, and the whole range was relaunched as Bisto Best. 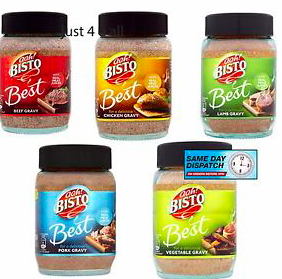 In Birmingham in the 1930s a competition was held to choose a name for the two Bisto twin characters, a boy and a girl smelling Bisto’s gravy. The competition was won by Mr and Mrs Simmonds, who named the twins after themselves, calling them Bill and Maree. Their prize was a china doll.

The Bisto Kids were also part of more elaborate advertising campaigns in later years. Although the Bisto Kids have not been included in Bisto advertising since 1996, many people still recognise them through social media and they’re very popular on Ebay.

During the 1980s, the company released a series of ads in the UK which featured a song that included the recurring phrase, “Never in a month of Sundays”.

In 1984 RHM Foods launched a nationwide competition to find children to act the role of the Bisto Kids, the recurrent “The Bisto Kids of the Year Awards”. The first ever competition was won by Hayley Griffiths and Jimmy Endicott from Doncaster. They were six years old at the time and became the faces of Bisto, both for public relations and marketing events, and also appeared in an advert shown on prime time TV to find the next Bisto Kids. 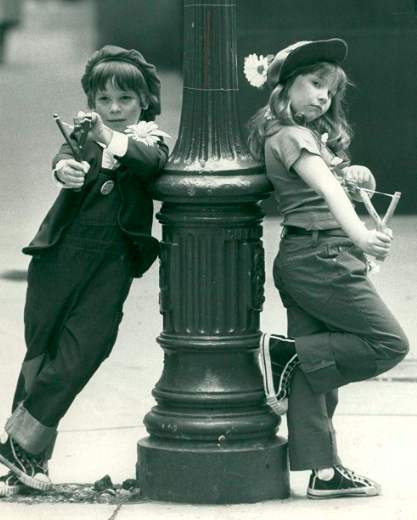 The company sponsors the Bisto Book of the Year Awards in the Republic of Ireland.

The latest campaign for Bisto encourages families to sit up at the table for one night a week to eat ‘proper’ food.

Bisto has had several owners since its creation. It is currently owned by Premier Foods, which acquired Bisto when it bought Rank Hovis McDougall in March 2007 to form the largest UK foods manufacturing company. Premier connect their process to the consumer through projects like Bringing Communities Together:

Bisto’s main competitor is Goldenfry Foods Ltd, which makes a branded gravy as well as most supermarket own-brand gravies.