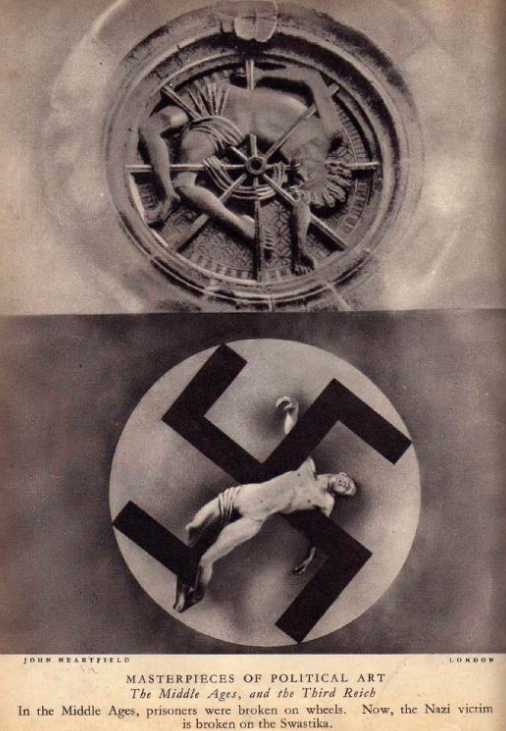 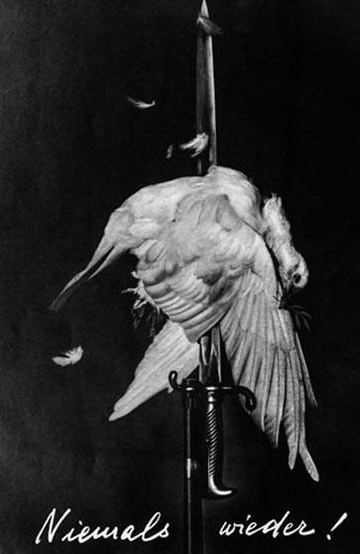 Above: Never Again: by John Heartfield produced in 1940 but not printed until 1959 and As In the Middle Ages, so In The Third Reich 1934

Today as I went shopping to the Zero Waste Shop on St James Street and to support the Black Lives Matter demonstration at 12midday  in the Market Square, I wondered why, seventy five years after the end of the second world war we are still imagining the future as something that needs to be defined and planned with military precision by military mindsets that in the tech environment however much we dress it up seem really to be just replicating privilege and underprivilege: short lives and long lives by ethnicity, class, gender,  postcode or segment.

We need to undo this wrapping up of so much potential.

We all know that the Covid environment has been an opportunity to make inclusion overtures to generations of people whom a 40 year period of privatisation and marketisation excluded and exploited throughout the world.

We know that this sense of getting to know everyone who lives in our neighbourhood and area, getting back to a conversational local environment has really been a good thing.

What we can never forget though is that at this local level of new insight when we recognise the unspoken contracts in the culture of our workplaces, schools and hospitals to not meet the aspirations and needs of pupils, patients, carers and practitioners who work in our public services that we’ve harmed everyone from top to bottom in society.

The way we’ve greeded at the post war world has been shocking: we’ve continued the second world war into a notion of growth and capacity that’s about feeding the minds, hearts and bank accounts of an elite and it’s all gone very drug and slavery and exploitative supply chain wrong.

At the local level in hospitals, schools and communities it’s been about a local version of the just in time supply chain creating an excuse and blame culture that continues to exploit BAME, working class and older people.  Lack of access to education if you’re not middle class has been a continuing harm, as much a form of aggression as direct, racist, sexist, classist ways of behaving towards others around us.

The demonstration in the Market Square was great: it was mainly people up to their mid twenties and a few older people linked though other organisations, such as Palestinian Solidarity. 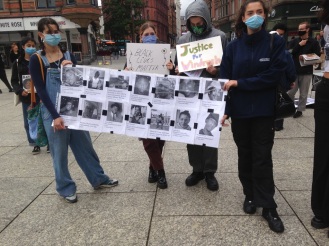 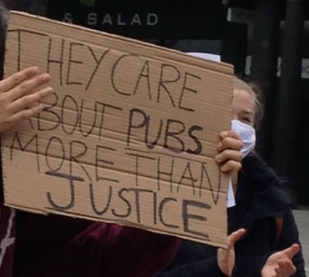 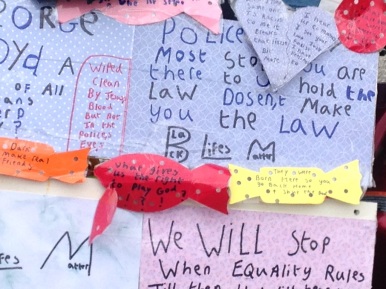 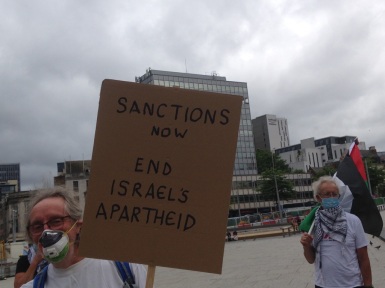 I loved the banners

When you think about the demonstration in a wider, economic, social, cultural and political context you realise that demonstrations need to have their sense of call and response from everyone in the community: when people demonstrate we need to understand how they’re demonstrating for all of us, we need to understand how we can redesign the template of our lives, the way we teach, learn, work, innovate, throughout our lives. It’s about recognising an exciting history in the present that’s about personal, social and historical learning and reconciliation, about new kinds of jobs, training, learning in the local that relates to the supply chains across the world.

You can get a real insight into how important it is to create new ways of thinking, living, working and relating at the local level in the  work of Dr Ali Meghji calls the Triangle Of Identity. His recent book “Black Middle-Class Britannia: Identities, Repertoires, Cultural Consumption” (Manchester UP, 2019)  is discussed on the New Books in Critical Theory Network podcast.   In the Triangle of Identity, social class is important  to some as a conceptual scheme as is ‘race’ to others: central to identity and a defined ‘whiteness’ is rejected, thirdly there is something Dr Meghji describes as strategic assimilation where people move between class and racialized spheres of action.

To me the interplay between thinking, doing, reflecting: acting up and acting out in and between the generations, backgrounds and genders is a creative and exciting part of being alive just now and it will encourage all white organisations, business support organisations,  all white leadership sturctures in organisations and businesses to realise that they’re really missing out: the future is all around them, get with the programme!