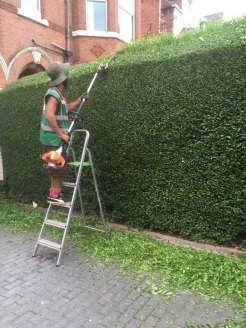 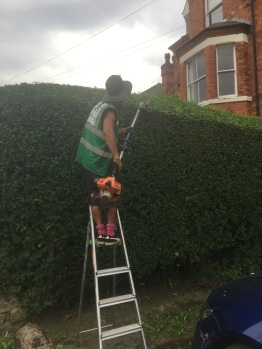 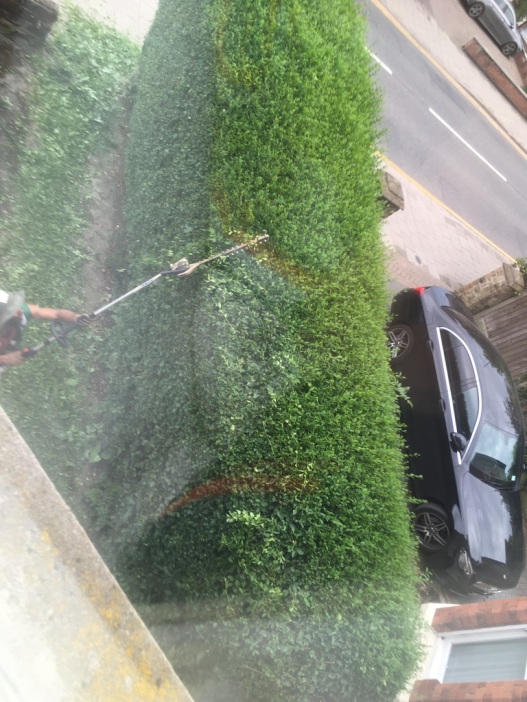 Whether we’re in a new future after lockdown where the dreams, hopes, skills, friendships and relationships we’ve grown and gained could bring economic change.

Changing the planet one garden at a time: Ron Finlay, the Gangsta Gardener in Los Angeles has been combining love of growing things with addressing inequalities.

Above: Ron Finlay’s Garden,  which he started in exasperation in 2010, now known throughout the world for the kind of energy it’s channelling to address the Mac Donald type food desert in Los Angeles.  Below a before and after image:

Back from the amazing Afro Futurism of Ron Finlay and colleagues in America, here in Nottingham one thing’s for certain: the garden keeps on growing, hedges need clean lines and gardeners, like hairdressers, are people we don’t know we need until they’re not there…..

So put Mowing Pastures Green in your Contacts: they’ve looked after our garden and hedge for the last three years and after they’ve been I feel like I’ve had a really good haircut- you know that feeling you had as a child, kind of liking the wildness of your curly, straggly hair and wanting to skive out of ‘getting it done’ but then the crisp clean feeling of a really good cut made you feel really cared for (even if you had the same hair cut as everyone else!).

It’s great to have local people providing gardening services who are reliable, efficient, cost effective and really pleasant.  Lloyd and Luke of Mowing Pastures Green are a great team with plans to build a great garden business linked to allotments, growing, health and landscaping in Nottingham.

I wish them every success.