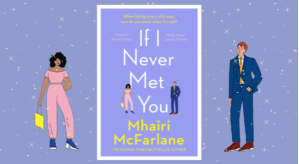 Above: If I Never Met You by Mhairi McFarlane

Mhairi McFarlane books: Last Night, If I Never Met You ,You Had Me At Hello, Don’t You Forget About Me, Here’s Looking At You, Who’s That Girl, After Hello, It’s Not Me It’s You

Characters in If I Never Met You by Mhairi McFarlane

Sometimes you choose to take time off, to pick up a book and spend a day living in it.

I did that yesterday with If I Never Met You by Nottingham writer Mhairi McFarlane.

I loved it because it explains through a really honest storytelling the way professional women navigate the minefields of work environments in the 2020’s connecting it brightly to forty(!) lives or memories of lives but at the same time, like a pebble dropping streamward, it ripples out gently into other, deeper thoughts about who and what work’s for, how to stand up for ethics in the workplace and find strong relationships.

It’s a rich seam that connects the imaginary, the hopeful, the optimistic with the real: it feels funny, silly, absurd and right. Our friends stand by us in our imaginations and in life but the book explains how we’re all wrong footed by rules, details, contexts that are bigger than us. The story though, is on our side.

Showing how best friend Emily holds Laurie to remember the ethics of legal practice in the deception she’s about to pull at the beginning of the story but by the end of the book you see Laurie’s realisation of the value of Emily’s friendship to her.

The story’s more than that though as you look at the yawning gap between what we (have) to say to protect our identity and reputation and what we (really) learn to do through experience. The real and the fake.

Because professional lives might look rare, exciting, difficult to find and keep from the outside it’s always great to look inside.

The story of Dan and Laurie’s eighteen years getting their careers together inside the old fashioned suffocating structure of Manchester solicitors Salter and Rowson where paternalism, male authority and privilege infantilise them, putting them in a kind of limbo changes when…. he just goes.

He’s got a rival colleague pregnant while telling Laurie that he just needs to do his own thing…(honest). Liar liar! He was looking at Jo Jo Maman Bebe before he left….what a twister!

Then Laurie develops a relationship with a really handsome, sexually active and apparently, ruthless colleague, Jamie, to help him get a partnership as a stable individual, help her get back at bad Dan. The information about Jamie squirelled up and based on equally ruthless gossip based on his ‘past’ in a different work environment(!), which is brilliantly evoked through the way the Rowson and Salter gossips gatekeep the organisation.

What I really enjoyed was the natural way the telling of Jamie and Laurie’s stories gave them a good chance of seeing each other in an honest and emotional way as two people who are equal.

What I also loved was how Mhairi showed how, just as Laurie’s really making personal headway in the relationship the men in the office call her in to their office to account for herself (in this relationship!).

Rowson colleague and partner Michael who secretly thinks Laurie should have him next, and ex Dan who convinces himself that he’s protecting Laurie from a man he can’t understand,

you see that the male characters think they own the women employees referring to ‘my’ top employee/ex-girlfriend/potential girlfriend is a black women (I used ‘women’ as the author notes where, instead of Salter and Rowson understanding and welcoming black history and culture, Laurie is seen as the ‘grammar’ kid from the tracks, one good one standing for the whole who are actively excluded, they close the door against more than the odd one or two, pick and mix equalities, we’ve all seen them).

(Laurie) and her friendships are layered, segmented, hidden in response to this structure and like the story, have to find their way out and to each other. The truth of difference itself an outlier in the organisation hiding inside the office inner circle of Bharat and Di.

Free Bharat and Di I say!

Work is at the top of everyone’s agenda just now, we’re all looking critically at it: how can we change work (and the world). In the novel when you go inside Laurie and Dan’s home, into their offices in Manchester, you also go inside best friend Emily’s PR business and pass by Laurie’s dad Austin’s promotional shapeshifting, you see a lot of sunk costs and people stuck on those sunk costs but you also see a way out..

Reading the book reminded me of a holiday I took with my daughter to Karystos in Greece. She was eight. I was a year before graduation and thought we deserved a holiday. A friend had been every year for a few years and recommended it. When we got there we just saw a post dictatorship landscape, half finished hotels, dogs everywhere, fed up, poor Karystossians without jobs or with underpaid jobs, expensive healthcare and casino and bunny club style yachting and wealth. Ha ha I thought, we’re dead lucky, we have each other.

I think that’s what If I Never Met You is about: don’t judge a book by its cover.