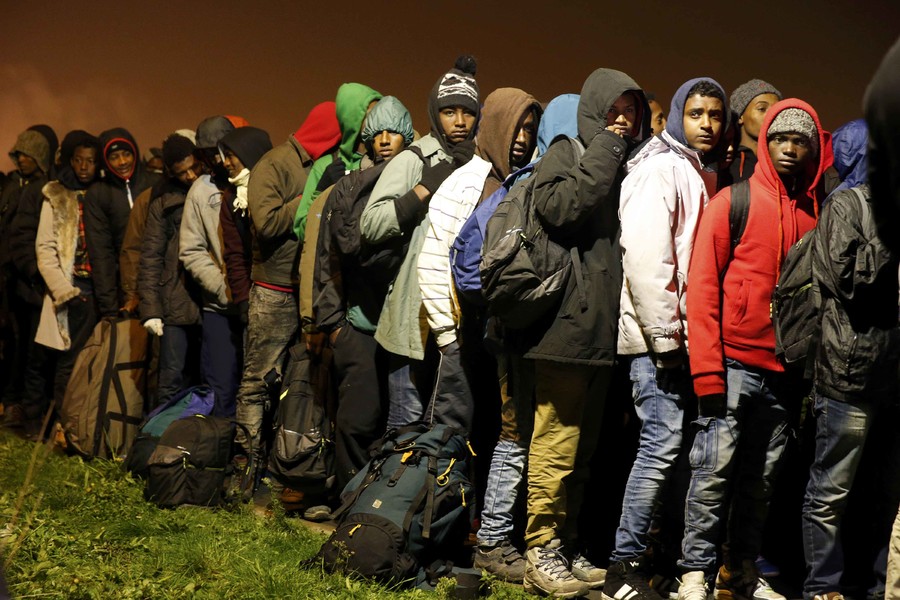 Above Migrants at Calais being moved on October 2016. The businesses, restaurants and related activities migrants showed they could produce in Calais was razed to the ground and the land used in the second world war for bomb shelters was ‘reconquered’ for wildlife….

Where are they now?

Our lack of empathy with refugees and migrants is as a result of supply chains that perpetuate racism, need, distress and exploitation.

Activism can change things. From the dignity strike in Palestine last year to the organisation of teachers in Los Angeles and the Prescription Addiction Intervention Now (PAIN) activism of artist Nan Goldin against unrestricted prescribing of addictive prescription drugs across America, people are using their experiences as drama: drawing attention to unacceptable forms of things to challenge toxic ubiquity in their lives: taking the bit they feel, see, that is harming them and challenging abuse.

In visualising, acting out a personal experience, activists are taking the private real to the public real. Finding a way to democracy and a voice is important, rights have been stolen by the shock and awe of the dinosaur like scale of gig and gang labour supply chains

In the last forty years with the implementation of the gig and gang labour supply chains, seven million people have stopped voting.

In this kind of Action, people who are affected touch the sensitive in the wider population. It’s an aesthetic where it suddenly becomes possible to take the overblown big companies and individuals to task and ask for accountability and more: a call and response to a much more rounded and long term view of all people.

Nan Goldin’s story of change, progress and development is now an America wide campaign for consequent changes in the supply chain.

Activists like Nan are taking the means used by civil rights activists in America and across the world and making the impossible, possible.

Nan did this after overcoming Oxycontin addiction. 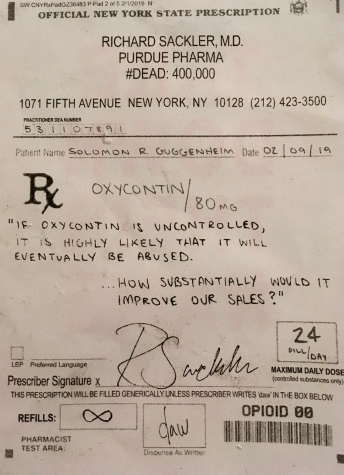 Above: the fake prescription used to highlight an email exchange between Robert Kaiko, the developer of OxyContin, and Richard Sackler, the founder of the pharmaceutical dynasty.  Sackler asks Kaiko:

“If Oxycontin is uncontrolled it is highly likely it will eventually be abused. How substantially would it improve our sales?”

and the email answer from patent scientist Kaiko was:

“The launch of OxyContin tablets will be followed by a blizzard of prescriptions that will bury the competition. The prescription blizzard will be so deep, dense, and white.”

Does this sound to you like some kind of weird, controlling world view that abuses power?

Think of the story of Stewart Adam the Nottingham Boots chemist who discovered Ibuprofen:

Above: the chemical structure of Ibuprofen.

When you contrast how in his scientific work that resulted in the discovery of Ibuprofen  think also of how Nottingham scientist Stewart Adam tested and developed the drug on himself (listen at 28.59)  it’s also worth thinking that we’re very lucky that he had great altruism and integrity.  Stewart says in the radio piece that he wouldn’t have been able to be the first Ibuprofen guinea pig now because of the supply chain compliance that surrounds discovery, trial, manufacture and distribution.

The health service operates in a enormous privatised supply chain where the space for the ethics and development of scientists, medical and health workers and professionals  has been contested, questioned and overwhelmed by forms of compliance that have created a hostile and aggressive culture towards some people in UK society.

The health service has been used by managerial forms of government to implement policies that supported the gig and gang labour supply chains: A & E departments have routinely employed security guards and regularly call the police to deal with the social issues that surround these forms of abusive relationship. Addictions, mental health issues, malnutrition and the problems of poverty and lack of social engagement cost the NHS 78 billion a year

This is destroying the culture of vocation and it needs to be restored through a new kind of education system, new kinds of jobs for everyone at every stage of life so that everyone working in health can see the benefits of happier communities. Health professionals want to be actively engaged in a new kind of practical ethics within communities, on behalf of communities. They know it’s vital for the future of their professions.

If medics are able and enabled to do no harm to be their best in the future  they need to feel and be respected at work, in society and to feel they can learn and be listened to.

Instead of properly employing people across society we’ve created a kind of gambling lottery of contractual quality that undermines vocation and the translation of skills, experience and knowledge in a way that colleagues feel is fair and just.

All workers just now are conscious of the almost permeable boundary between legal and illegal in the work place because of the hostile environment of austerity. The lack of investment in buildings, environment, education and training are in supply chain terms how the pressures of the market have pushed themselves into the most intimate spaces of a heritage vocational system demanding that they be paid and paid and paid.

How can the care medical professionals would like to be able to give thrive in this environment? How can professionals move beyond stereotypical joking about categories of people, superficial comments made to deal with the tragedy of supply chain greed in the NHS that has undermined vocation and idealism?

We need diversity, a rich, long view of learning, development, human longevity and empowerment everywhere in society, not a culture that encourages disability while denying access to the disabled, dependance, addiction and ignorance in the service of dinosaurs.

It’s the 21st century: hooray for love and hope and idealism!